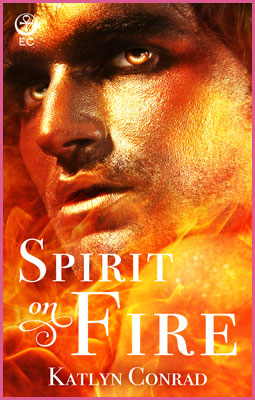 Hot guys need apply here! Wait! That worked? And I’m talking seriously hot. S.E.R.I.O.U.S.L.Y. This guy is on FIRE! And he’s a little demony, but all the better. I have to tell you hot, dangerous, kinda on the edge of darkness and heavy on the tortured is my kinda man! Katlyn Conrad delivered him when I said, “Hot guys need apply here!” like she made him up or something! What are the chances?

Some of us are born with all of our Lego parts pre-pressed and others of us have to grow out or interlocking pieces. Samantha really lost the Lego Lottery; she is a Lego Shaman–I mean a Shifter Shaman. As a shaman she should have a certain aptitude with a particular shifter sect with which she could work her magic but Sam’s got the small stick of crap luck and instead of being rich with the power she got beat down by the hierarchy in the dog den where she once lived. The world of wolves wasn’t good to her and when she pieced herself together, and that was all that was left, she hit the road and has lived in hiding ever since. She is on the flight portion of fight or flight, if a shifter takes notice in her she takes off.

What gets a guy all fired up? Well sibling rivalry really seemed to burn Roger because he got pissed enough to turn his brother Marek into a Fire Demon and eternal buttmonkey. Well not a buttmonkey  in sex thing, no I mean Marek is Roger’s slave for life, ETERNALLY. And I thought that Cain was a twat for killing Abel! Marek would have given his nuts to have Cain for a brother! Grudgy, judgy elders from Hell are the worst apparently. There is a lot to be said for seething hatred because when Marek gets mad–this boyfriend gets stone cold methodical about his retribution.

There is a nice balance in this book of Marek and Sam working toward something and the reader getting back in touch with the balls and twig of the problem. Often when something of this nature comes around the author gives some full on smack and tickle and then they lose the body of the lore in their story. Katlyn does a fantastic job of staying in touch with the reason Marek needs to accomplish his goal.

There is also the other half of this glass full or half philosophically redundant and that is Sam’s part; if any part felt clunky to me it is Sam’s development through the story. I’ve thought it over and over I can’t figure out if it’s because I feel that there doesn’t seem to be any “work” that she does for her gain or because I felt that her parts of the story skipped by rather quickly while Marek’s had a heavier, more definitive feeling. Either way Sam felt not fully formed to me. She felt like she needed a few more layers to be worked on her in re-write for her to be the same level of character as Marek and Roger. I do realize she is supposed to be a light character as opposed to their darkness but she feels not quite baked yet–a few more layers.

No matter how doughy she may be yet, the overall picture in this book is damn good and the writing for the book is great. The one thing Katlyn Conrad wields well is information and she feeds it to readers like a benevolent benefactress in some places and withholds it as a testy lover might in others. Tension makes or breaks a story like this one and she hits the nail on the head! You will love this book if you like Madeline Pryce’s Dark Series, Alexandra Ivy’s Guardians of Eternity, and I’m going to invoke the great Sherrilyn Kenyon’s name. You will like this if you are a fan of the Dark Hunter books. Marek reminds me of Xypher from Dream Chaser. Xypher is one of my Dark Hunter Series Book Boyfriends and even though there is a million books in the Dark Hunter Series these days there are only three boyfriends in my book. Marek you just got a handsome compliment, sweetcheeks.

The werewolf paid cash, sliding the change into the hip pocket of his jeans.

At the other end of the counter Samantha pretended to study the flyers on the cork bulletin board—a high school production of The Tempest, a ten percent discount on acupuncture, a tai chi class at the local Y. The scent of coffee and the whir of an espresso machine filled the air, suddenly stifling.

Samantha had time to grab coffee but not for a were encounter. And if she was late for work again tonight she’d lose this job, just like she had all the others.

Don’t see me. Don’t see what I am. I am normal. I am invisible. I am shielded by a protective light…

Too late. Her heart roller coastered downward. He was striding toward her.

She met his eyes, determined to show no fear. The werewolf almost looked human. His plain white tee stretched tight against washboard abs. There was a hint of a shadow about his chiseled jaw and in her mind’s eye she caught a flash of rumpled sheets and sex. Like a photographic overlay, the spirit of the wolf shifted inside and around him. It snarled at her and her spine stiffened, the skin on her arms tingling. There was no call for the were to be rude, she thought.

He stopped in front of her and leaned against the counter. His gaze took a leisurely stroll from her low-heeled boots to her mahogany hair and corkscrew curls. Petite and curvy, she was a twenty-something morsel in a lipstick-pink trench coat.

“What’s a girl like you doing in a place like this?” His voice was a husky growl.

“I think you’re supposed to say, ‘nice girl like you’.”

Dammit. He did know what she was. And worse, she was responding. Her pulse rose, warmth flooding her cheeks.

She hated this because a part of her wanted to smile, to flirt. Sam was lonely and not proud of the fact. But once the were and his clan discovered she was broken things would go bad. Fast. The weres were all about survival of the fittest, and the broken were a danger to the pack. She’d be driven out at best and at worst… She pushed that memory aside, the beating from a pack of female weres who had left her for dead. The surgeries that had followed. The drugs. The confusion. She’d wanted to die then, had expected death.

God, how she wanted to be normal.

“Sam?” The barista slid a white paper cup across the counter.

Samantha snatched the coffee, heedless of the heat burning the ridge of the cup into her palm. She turned to leave.

The were moved to block her and pressed a broad hand to his chest. “Sam? That’s my favorite name. Now I know it’s love.”

She rolled her eyes and stepped around him.

He bent his head as she passed. “Don’t leave, wolf shaman.”

“Excuse me.” She wove through the coffee shop and he followed her into the drizzly San Francisco night.

“Have dinner with me.”

He grinned. “Breakfast then.”

She shot him a black-layered look. “No.”

“Why not? I’m charming, good-natured and I don’t bite. Much.”

He stopped beneath a streetlamp, the cone of light illuminating swirling droplets of fog. It sparkled in his hair like shards of glass. “What’s life without a little risk? Take a chance.”

She shook her head and hurried down the slick street, the noise from the coffee shop fading behind her. He was wrong.

Katlyn Conrad worked overseas for nearly fourteen years, in the fringes of the former USSR and deep in the Afghan war zone. Her experiences abroad not only gave her glimpses into the darker side of human nature, but also sparked an interest in the effects of mysticism and mythology and how both are woven into our daily lives.

She writes paranormal mystery, romance and suspense, blending her experiences and imagination to create vivid worlds of magic and mayhem.

Katlyn has never met a dessert she didn’t like, and her guilty pleasures are watching Ghost Whisperer reruns and drinking good wine.

Shamans and Shifters, Book One

Samantha wants a normal life but the were world won’t leave the sexy new shaman alone. An outcast, she has the potential to control were spirits of all kinds—if only she can figure out how. When she encounters a red-hot demon were, everything she never wanted to know about the supernatural gets turned on its head.

The fire demon Marek claims he’s been ordered to kill Samantha but he’s disobeying the command. He’s come to save her instead, so they can work together against his sadistic vampire master. Demons are notorious liars, so Samantha has her doubts but no choice. A common cause—survival—draws them together and cool suspicion turns to sexual heat.