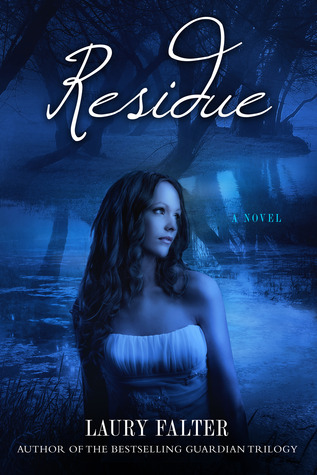 I have such a soft spot for any book placed in N’awlins. I think my fascination actually began when I was an early teen reading historical romances based in early New Orleans. Ever since I’ve just been attracted to all stories set in the Big Easy. It doesn’t matter much to me what that genre of that story might be, it’s enough for me to hear things like Bourbon St. and Jackson Square oysters and beignets–I’m hooked. The setting of Residue might have been the initial appeal but this modern day Hatfields and McCoys quickly checked my head and sucked me in.

First things first, I’ve the need to address something that irked me something fierce when I gandered at Goodreads reviews on this book. There were more than a handful of people making comments about this book being a Romeo and Juliet story. I feel the need to address the misguidance in such a reference. Laury Falter’s story is about two feuding families who have been warring for generations for unfounded reasons and over the course of time myth and tradition has become the basis of the dispute more than anything more. That might be somewhat similar parallel to Shakespeare’s classic tale but only in a general–half the story sense. One massive fact remains to separate the two… Romeo and Juliet is a tragedy based upon a foolish and impetuous adolescent affair. It is steeped in betrayal, meant to be a moral statement on the shameful pettiness of the aristocracy that focuses on the past, as their young sacrifices themselves for a love that they are forbidden to have. Shakespeare was looking at the foolishness of young love and the extremes one will go when the heart is denied.

When I mentioned in the introduction that this story is a modern retelling of the Hatfields and McCoys, I said so because of the family feud that existed between the two families and what it was based upon. The Hatfields and McCoys isn’t a fictional work, it’s a historical fact. It was not the personal betrayal between the lovers in the two families, and there were only three unfortunates who attempted that foolishness, but a constant friction that compelled them to continue to irritate each other on a regularity that was ridiculous and tiresome.

While Shakespeare is amazing not everything comes back to the Bard. He, Stephenie Meyer, E.L. James and Justin Bieber really aren’t the basis for every original work you might suppose is out there. Sometimes history, other societies, alternative cultures and average people provide the world with situations, lifestyles and stories before someone makes something similar popular with us. Crazysauce, I know. Who’da thunk it?

Now lessons are over. Let’s talk about witches and voodoo.

I really liked this book. It’s almost a coming of age/self discovery novel even though Jocelyn isn’t really “coming of age” per se. Jocelyn is a Weatherford and even though she doesn’t know it at the start of the book–that means something. She has grown up in a boarding school in New England away from her family and until the day of her sixteenth birthday when a sudden health concern sends her to New Orleans and family she has never met she assumes she is just a regular girl like everyone else. And the story she hears upon arrival is enough to question the stability or sense of humor of her cousins and aunt because they claim to be witches–and say she is too. Amusing, no? As if all that isn’t enough when sent to get “school supplies” she meets the hottest guy she’s ever seen under strange circumstances, at a magic store! Could things get weirder?

Jocelyn is a great character. There is no annoying struggle that drives you to drink with her. Her relationship with Jameson has the perfect amount of angst, you don’t drown in overwhelming emotional frustration with her love story with him. The Weatherford and Caldwell battles are entertaining and reminiscent of sibling rivalry more than bloodlust. I never got the impression that death was the desire–just maiming and acute discomfort. I have to say that if there was one thing that melted me into a puddle of goo most successfully it is the private communications between Jocelyn and Jameson because for some reason it felt to me as if during those times they were actually in their own world separate and outside of that that their families existed and chaos ruled. Swoon! Young love strikes again.

I’m intrigued to continue the series, there are three more books: Birthright, Savior and Prophecy. This is a book for those who were fond of L.J. Smith’s Secret Circle or Lizzy Ford’s Witchling Series.