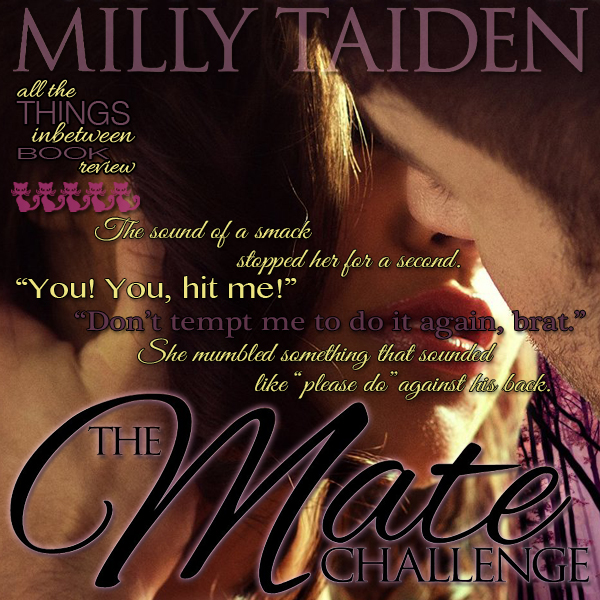 The Sassy Mates books fell into my lap when I began doing what I am happily calling Amazon Book Crawls. Social people have bar crawls and do foolish things with WTF consequences that they often need to explain to family, friends, and/or the police, for a while I feared my book crawls would land me in Debit Card jail with my guy, but he responded with the nicest pass which was, “I will never begrudge you books”.  My habit is to pick a topic, plug it into an Amazon search, in this case it was ‘Shifter Mates’, and then I just flipped through the pages buying whatever looked interesting.

Now… I should tell you that I buy, EVERY MONTH, between 100 – 300 books. Yep, I do. And that thing everyone cries about when reviewing ARCs on how Amazon takes down their reviews NEVER HAPPENS to me. Why would they ever want to piss me off? I’m a cash cow. Will I ever in my lifetime read those books? NO! But as time has passed and I have met more authors and they have been for the most part, Indie Authors, I just buy to support them now. I consider it paying it forward.

When I first read Scent of a Mate… I began buying all Milly’s shifter books. I was in lurve! She has a way with furry men and sexy sex that makes my Kindle feel like I’m doing a workout. I dunno if it’s the panting, the flushing of my skin or the hot flashes but her stories make me feel like I need an energy drink afterward.

Aric? Nate? Jake? …For me? NO! I have always had a thing for Mason. He had that devilish I-have-already-been-bad aire to him that spoke to the part in me that love the devilish types. Nate had some darkly-ness to him and that was all good for me. Jake had that torpedos ahead and damn the cannons thing that was okay. Aric was all control and I am the ALPHA! That is a thing, too. Mason though… he is that sexy charmer that knows he has you. Knows, you know, he has you. I knew when his book came, my Mason love was going to overflow it’s cup. Mason = Ali happiness!

Emma Ferro was not likeable babe to me through the earlier books. I dunno why. Maybe it was because Milly was keeping things back about her in preparations for her own book, and it felt like she was off in someway, but I thought she was a really unlikable BITCH. Yep, bitch. But something about seeing her in this book curbs a lot of that “stubbornness” which in other books really was bitchiness. =P Emma is stupid as the day is long, but I didn’t see her as cold and bitchy.

The one thing that drives me a little nuts and it’s endemic of the Sassy Mates and a large percentage of Romance books and it’s that the Sassy Mates have a death wish. I really want and hope that when we go forward in this storyline, hopefully we will continue further than just Ellie and Caleb,  and that is that I pray we please lose the mental retardation that each one of these women all had that lends them to act out in all the ways one confuses independence for carelessness and an invites for others to be put in danger. I don’t think authors realize that the strong independent woman trope is so horribly misrepresented by putting illogical, overemotional and helpless females who don’t live up to it, and often set back the idea of female forward characters by generations. Readers want to read about heroine’s who are sexy, who are stubborn, who know their own mind. They don’t want to live in Erotica versions of I Love Lucy where the heroine and anyone dumb enough to be suckered into her schemes fall to the foolishness of it.

In the end I was more than happy that Emma and Mason got their Happily Ever After, and then weirdly enough, I chose Nate and Karla as my favorite couple. You just never can tell how my mind will work at voting time. Mason is still my favorite Wolfe boy, but Nate and Karla are totes my fav smoochie smooch smoochers.

If you have read this series all the way through pick up Millyface’s Paranormal Dating Agency books or the Black Meadow Pack Books. I really LOVE them both! 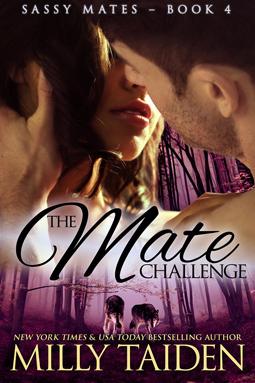 Emma Ferro wants nothing more than to accept Mason Wolfe’s offer to be his mate. He’s wild, sexy and can do things with his tongue that should be illegal. But Mason is also overwhelming her with his need to protect and keep her out of trouble. He needs to live and let live. It’s not like she’s killed anyone… yet. Until he learns she’s an independent woman, he’s going to stay waiting.

Mason Wolfe has a problem of the short, sassy and curvy kind. Every time he leaves Emma alone, he knows she’s going to get into trouble. It’s getting to the point he’s ready to slap a tracker on her butt just to keep his sanity. He’s busy holding down the pack, helping with fighting new rogues and a secondary threat that’s come to town.

When Emma goes searching for a missing girl, she finds a lot more going on in Blue Creek than even the biggest shifters are aware of. With the help of the least likely person, she’ll put herself on the line in order to save the ones she loves. Mason will have to find a way to help Emma or face losing her forever.

Mason Wolfe stared deep into the eyes of his mate and had to hold back the urge to take her then and there. Emma. His beautiful, fiery woman was a pain in the ass but he wouldn’t trade her for the world.

From the second he’d laid eyes on her he’d known Emma was his. The only one for him. Unlike his brothers, he’d marked Emma as his already. The problem he was having was that Emma didn’t like accepting his words as fact. She said she would not accept his mate bite if he did not stop trying to control her. Not that he was trying to control Emma. God knew that was impossible. All he wanted was to keep her safe from the dangers in Blue Creek. Too much was going and Emma somehow always found her way into the middle of danger. He wouldn’t–couldn’t lose her to anyone.

She swiped her wet, pink tongue over her bottom lip and focused on his lips. Hell how he wanted to kiss her. Soon. But right now, he wanted to have his own brand of fun with her. After all, she’d made sure to get her friends marked by his brothers for the night. So what did she expect would happen with her?

He grabbed her wrists and pulled them behind her back, loving the feel of her curves pressing on him. His Emma wasn’t small. She had curves. She was soft with a real body. A body he adored touching and looking at. He lowered his head and groaned as the scent of her arousal curled around them.

She didn’t hesitate. That was one of the things he loved about Emma. No matter what came out of her mouth, her body always let him know she wanted him.

Their lips met and passion broke through the cage he’d locked it in. Her lips were feather soft and she tasted so good. Like coming home. The animal under his skin pushed him to aggressive. To get her naked and inside her. But her reined in his beast and focused on Emma. On the soft little moans she did when he swept his tongue in to her mouth and glided it over hers. He focused on how she boldly stroked hers over his and lured him to play. His Emma wasn’t shy.

He held her wrists behind her back with one hand and yanked out the cuffs in his back pocket with the other. She was going to be angry, but he knew that was the only way to get her out of the mating site without argument. As much as he did love debating with her, he had something a lot more fun planned for her for the night.

The cuffs clicked into place. It took her a moment before she pulled back from their kiss, eyes dazed and confused, to say something,

“What did you do?” She asked her voice a husky whisper that shot lust right down to his cock.

He slid a hand down the side of her face, caressing her cheek and staring at her hazel eyes. Emma was gorgeous. Even with her lips pinched into a straight line and her brows creeping down in a fierce frown. “I’m taking you somewhere.”

Her eyes widened. “I can’t leave! You know that, mutt. Now take these cuffs off me and let me get back to work.”

He grinned and glanced at the mating site where people were talking, the couple everyone had gone to see had gone off to have private time.

Something he wanted badly with Emma. If he let her stay she’d just give him more excuses and he was tired of it. He wanted her now.

New York Times & USA Today Bestselling Author Milly Taiden (AKA April Angel) loves to write sexy stories. How sexy? So sexy they will surely make your ereader sizzle. Usually paranormal or contemporary, her stories are a great quick way to satisfy your craving for fun heroines with curves and sexy alphas with fur.

Milly lives in New York City with her hubby, their boy child and their little dog “Needy Speedy”. She’s aware she’s bossy, is addicted to shoe shopping, chocolate (but who isn’t, right?) and Dunkin’ Donuts coffee.

She loves to meet new readers!

Milly Taiden on All The Things Inbetween: