I won’t go into my normal Lizzy for President speech. If you aren’t going to vote for her by now that is too bad. I’ve been hard at work on my poop bomb gift bags for all those who fail me so we will just go forth with the knowledge that to the victors go the spoilers… and all the rest of you get a whole lot of poop in a bag.

I think I read this book in about three and half hours because I have an actual mental setting called, “Lizzy Land” and once I enter that setting nothing else registers. I’m not even sure if I blink or breathe. It might be a tantric or zen thing, all I know is once I reach Lizzyspace the real world drops away and for the length of the book I am inside the story. This one was an awesome one to witness, don’t be hatin’ but I saw a couple former angels and a kinda sexy lethal satanist. Eat your heart out. I know you’re jelly!

The one thing that seems to be done a lot in paranormal is the celestial thing and it is really hard to find something fresh and new under the sun. Hear No is a thankful divergence from the angelic world where good and bad are black and white and evil and purity define the essence of every action. Our hero, Nathan, is the worst rated spirit guide in the business. For the last three thousand years he has managed to help the most re-incarnated angels adjust to their new lives as humans through the most unethical and misguided ways he could imagine. He’s not above giving them illegal substances and shiny things to chill them out. But, hey–if it works, that’s all that matters, right? He’s effective and in his mind and in the minds of all those who really matter that is really what counts. So when he get’s called to go to Virginia for a new assignment it’s jest another job to him. But it’s really more FUBAR than even he can imagine. 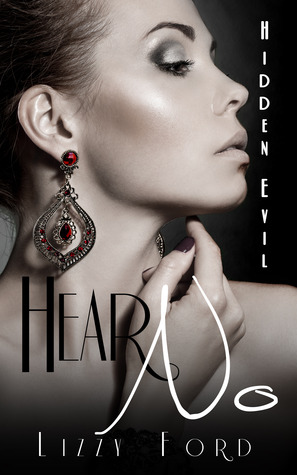 Kaylee isn’t paranoid or mentally deranged but she knows that there is a Shadowman following her around and peeping in her apartment window. He scares the crap out of her and no matter what she does he never goes away. Her crappy job with her crappy boss could be making her crazy, but crazy enough to see things? Seems a far off bet. When she and her employer end up in a mental facility she can’t help but wonder if it’s not the universe’s way of sending her a message. When one of the patient’s also sees her Shadowman though and it’s grounds enough for the unstable deaf girl to stab Kaylee as she blames her for bring the Shadowman to the facility Kaylee doesn’t know who is more crazy.

She had been hunted for weeks and after Amira’s spirit guide sacrificed himself for her she went to the safest place she could go. When the Shadowman finds her in hiding she knows her time has run out. As a a first generation reincarnated angel she knows how sinful violence is and how wrong it is to take a life but letting Kaylee live when the Shadowman is connected to her is not something she can allow. If she let the woman survive it would jeopardize the lives of every human on earth.

However when Nathan, Amira and Kaylee all come together a whole new celestial and universal set of problems come into play. It’s not as simple as shiny snow globes and a little recreational something to calm things down. Life is literally going to hell and no matter who you are willing to kill to make things better, poops gonna get real.

This book is the first in the Hidden Evil series and it has a VERY large cast of characters. I am a huge fans of books that can successfully support a slew of well developed secondary characters. When an author can create something like a rich commune of personalities that play off of one another, it not only improves the dynamic but it enriches the history, lore and structure of the story because you are adding a great deal of personal background to build up detail. In this first book you have not only Nathan and Zyra’s previous life together you have Troys life before he lost faith, the significance of the news article with Nathan’s address in Tucson five years prior, You have the romance of Nathan and Maggy that ended twenty nine years earlier, the grey area of is he or isn’t he that is Edgar of the knives, piercings and tattoos and what he has to do with Zyra? Having a large ensemble allows you to raise a lot of questions and pose a great deal of conjecture about those in the stories. I like that it in this book Lizzy let a great deal of the information mislead us. What will be really great to find out is not who is good and who is bad, but rather what is good and what is bad.

It will be a while before See No comes out. I can’t really cry over it because she is a machine and she writes a book almost every three days. I would enjoy the releases a little more if she could work with me a little and let me catch up. I am behind and unless the power goes out where she is or some regional catastrophe occurs like her area runs out of her favorite snack food, I can’t see me getting all my ducks in order. I was all caught up until last Spring. I went home to visit my mom and she (is a luddite) and she didn’t have internet (Yes, there are people like that. And no, my mom is not the unabomber.) so I got backed up. When I got back home I got depressed (happens–my happies got broken for almost two months). And by then she had written over fifty million books! These are the facts, ma’am.

Anyway… Ms. Lizzy Ford can be found running for President on my nominee (if you don’t want the poop to be with you then you will consider wisely). She can be found at Guerilla Wordfare, Goodreads, Twitter, Facebook, Google+, Pinterest, and Wattpad.