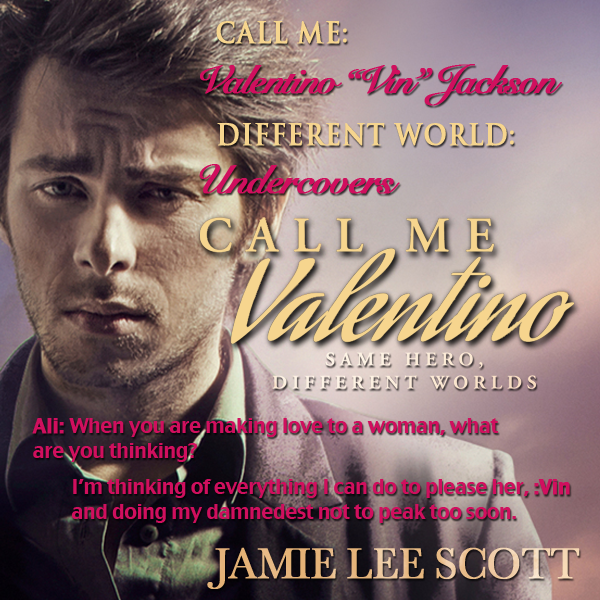 Vin Jackson is a man of few words, of course it doesn’t take a lot of words to get a good job done well and this job only had 14 Valentine Questions to whet your whistle. This is that sexy, slightly inaccessible guy who is a rock when you need him but rough around the edges. He’s hard to read and doesn’t give away much so don’t think this questionnaire is going to give you much insight so sorry babes, you’re going to have to read Undercovers to get a pulse on him. FBI Agents don’t go down easy, I did my best.

Describe your idea of the perfect relationship:
Two independent people, who can fend for themselves, but choose to be together because they are better as one, than as two.

When a woman is with a man, what should he be thinking about?
Well, not that a man can change that he’s thinking about sex all the time, but he should also think about her, and paying attention to what she’s saying (verbally or non-verbally).

When a man is with a woman, what should she be thinking about?
Him, listening, paying attention to him, and what makes him tick.

Have you ever broken a heart so badly that you felt you may be the bad man?
Sorry to say, yes. I tried to be nice, but the other person just wouldn’t end it nicely.

Would you rather with a good girl or a bad girl?
I’ll take bad girl, because there is good in everyone, and a bad girl will be more fun.

Define Sex:
A co-mingling of bodies, with either full intercourse, or just the foreplay that may or may not lead to intercourse. Enjoying each other’s bodies.

Describe your idea of the perfect woman:
She’s self-confident, doesn’t need a man, but enjoys him, and is above all happy. She’s smart, intuitive, creative, and willing to help others. She puts herself first, but not to the detriment of others.

What is better an innocent smile or dirty mind?
I say it’s a 50/50 proposition.

How should a real man kiss?
With soft lips and lots of passion. Work with the woman, don’t force the kiss. And never, ever slobbery!

In what three words might a woman describe you when you are in bed?
Attentive, knowledgeable, insatiable.

When you are making love to a woman, what are you thinking?
I’m thinking of everything I can do to please her, and doing my damnedest not to peak too soon.

What is your wildest dream involving a woman?
Days of passionate sex, doing all of the things that make us both fulfilled, followed by great food and maybe feeding each other, then walking away the next day and neither having the obligation to contact the other.

Define Love:
When I find it, or feel it, I’ll let you know. Until then, I’m still trying to figure that one out. 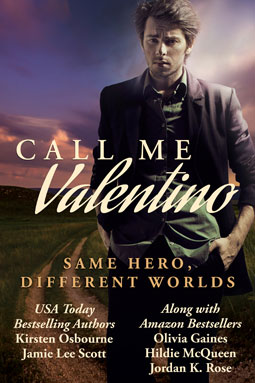 Fall in love this Valentine’s Day as USA Today and Amazon Best Selling authors come together to bring you one sexy hero written in five different genres. Call Me Valentino uses the same hero set in five different worlds. Your new book boyfriend is a cowboy, an FBI agent, A Highland Laird, a real estate developer and even a vampire. Which Valentino will be your favorite?

The Matron by Kirsten Osbourne:
Since being widowed, Cassie Morgan had devoted her life to the orphans in the orphanage she’d managed. When a new church took over the orphanage and decided to turn it into a boys’ home, she was both frightened and unsure about how she would make things work for the girls. Being told she had to take fifteen young ladies all the way to Texas from New York didn’t make her feel better.

Valentino Hayes had spend his entire adult life searching for the younger brother he vaguely remembered. Just after finding a lead that would send him to Fort Worth, he was offered the job of driving a bus full of orphans to Texas. He jumped at the chance, knowing he needed to not only find his brother, but work while he was searching. He didn’t plan on Mrs. Morgan’s love for the children to turn his head. Could he convince her to travel with him? And how was he going to provide for a wife while he was still searching for his brother?

Undercovers by Jamie Lee Scott:
When FBI agent Valentino “Vin” Jackson’s undercover sting operation goes bad, he teams up with Special Agent Ellis Boyd of the DEA, who has some special talents of her own, to take down a drug ring working for the Mexican cartels.

The Brute and the Blogger by Olivia Gaines:
Tino Boehner was up to his ears with Ebony Miller’s pot shots at him on her blog. Just as he was trying to figure out how to turn the tables, fate dumped her in his lap. Seizing the opportunity, he made her an offer she couldn’t refuse; come work by his side for a month.

A month can be a lifetime, or just enough time to make a man want to change his brutish ways.

Highlander, The Archer by Hildie McQueen:
Valent made an oath to protect the McLeod clan after they rescued him as a foundling. However, after years of mistreatments at the Lairds hands, he questions his obligation to uphold his promise.

When a rival clan attacks and kills her brothers, Ariana McLeod’s world is turned upside down. That she’s fallen in love with the handsome archer, Valent, is a complication and a blessing at once. Amidst battles, revelations and treachery, is it possible to expect their love to triumph?

A Vampire’s Penance by Jordan K. Rose:
The chain of events set in motion when Rafe Valentino tries to stop his brother from making the stupidest decision of his life borders on deadly. Rafe goes from being one of the most terrifying creatures to walk the earth to requiring around the clock nursing care. As if being physically injured wasn’t enough, the senior member of The Vampire Guard has no choice but to reveal the heinous secret of his past in order to protect nurse Maddie Van Kool from throwing away her life on him.