Featuring “Fly Me To The Moon” by Bev Elle 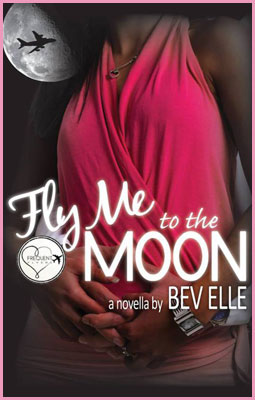 Fly Me To The Moon Synopsis:

Ticketing agent Jessamy Taylor has been in a dating slump exacerbated by moving her sickly mother into her home. The truth is she’s never gotten over the quirky Dr. Griffin Sanderson whose Obsessive Compulsive Disorder drives her crazy, despite his excellent bedside manner.

Fly Me To The Moon is a love song covered by many, the most memorable being Frank Sinatra. Griffin whistles this tune incessantly, but that’s just one of the many odd quirks Jessamy Taylor either loves or hates about him. Since their ill-fated love affair two years prior, she’s found no one to replace the good doctor.

A date that goes awry for Jessamy somehow ends with her in Griffin’s arms. Will the changes he’s made be enough this time, or will secrets tear them apart?

Purchase Fly Me To The Moon:

Fly Me To The Moon Excerpt:

“I have a couple of bottles of that merlot you like that we got in St. Augustine that one time. Would you like to share it with me tonight?”

A nightcap between friends. Jessamy could think of nothing she’d like better at the moment. “I’d be delighted.”

There was something different about Griffin. An undercurrent of confidence bordering on a swagger he had not possessed before. Jessamy could feel her body responding to this handsome, virile version of the man she had known so intimately before. She squeezed her thighs together and thought of the commanding heights they achieved when he made love to her, only to descend into agonizing depths once the deed was done, and then she relaxed her thighs.

When they arrived at his home, he took her hand and pulled her into the kitchen where he held a seat out for her at the gigantic island at its center, then opened the door to the pantry he’d turned half into a wine rack and retrieved the two bottles in question.

“You know, I feel bad enough after that failed date to drink both of those bottles myself,” she said.

Griffin hesitated as he set one and then the other on the bar in front of her. “I could bring out more,” he said.

“Just kidding,” she said with a grin. “If I drank both, you’d probably end up holding my hair at the end of the evening, and that’s not a good look on me.”

His mouth quirked up on one side as he reached into the cabinets and brought out pristine stemware. When he carried everything to his sitting room, they got comfortable on the sofa; soft music played in the background, and Griffin poured them both a generous glass and proposed a toast.

“To old friends starting over as new friends,” he said and touched his glass to hers.

Clearly, Griffin wanted another chance with her, but she wasn’t sure if she could withstand what them being together again would entail.

Jessamy proposed a lighter, less intimate toast. “To creepy dates. May neither of us have any of those ever again!”

“So these are really the last two bottles of that case you bought?” Jessamy took another sip, the smoky, natural sweetness bursting on her tongue.

“Yes. I gave a few bottles away as gifts, because I really never wanted to drink it with anyone besides you.”

She turned away slightly embarrassed by the earnestness in his eyes and in his words.

Romance flies the friendly skies in this diverse collection of short stories from a talented group of best-selling and up-and-coming authors.

There’s something for everyone in this mile-high compilation – from a love story born in a blizzard to a steamy encounter spawned by a series of crazy events. For supernatural fiction fans, how about the tale of an airport that’s also a portal to another world… or a scheduled flight that takes a detour into an alternate reality?

From an unexpected trip that reignites a twenty year old flame, to a quirky liaison between a ticketing agent and an adorable doctor, Frequent Flyers takes you on a journey that will touch your heart and leave you flying high!

Bev Elle is the author of sweet and spicy contemporary romance, women’s fiction and historical paranormal romance. A lover of books–many already written, and those she harbors in her very active imagination. Writing is a passion she’s had for many years, but was unable to act upon. Bev Elle is the mother of three human children and two canines. She is also the lover of one husband. When Bev isn’t writing in her spare time after work, she is thinking of doing so.