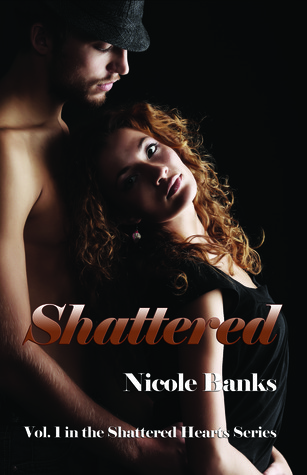 was first published in February 2013, the first book in the Shattered Hearts series. I sort of lucked out when I posted the call for indie authors on Goodreads and Nicole responded–I replied to her before I looked at her profile and was rather happy when I found I had had Shattered in my TBR shelf already. I think the stars aligned and we were fated all that stuff. Kismet. =)

Shattered is a pretty heavy story with a rather large cast of secondary characters. Nicole handles alternating POV’s exceptionally well throughout the book while jumping from the two main characters, to the minds of their close friends, family and occasionally the villain. Even with all these character changes she manages to maintain that voice of each unique character while keeping you wondering who it was that committed the assault on Jasmine four years earlier. And I will tell you now… Other than exempting Angel and Kris, Nicole manages to make everyone seem suspect up until the very end with amazing ease.

Since I just named dropped a bit let me introduce a little of the tale to fill in some of the blanks. Jasmine is part of a rather large group of friends and family who have grown up together. Her best friend Kristal and her brother, Angel have always been incredibly close with Jasmine and her family. Up until a short time before Angel left for the Marines he and her brother Jay were best friends, but it seemed that life went to hell in a handbasket through a series of misfortunes that only began with the two men falling out. While Angel was away, Jasmine was forced to face unbelievable heartbreak of losing her brother and an assault causing trauma that tore her apart. Being a Marine at war wasn’t a walk in the park for Angel either. All of this culminates to a head when Angel returns home and Jasmine and Angel are buffeted by their inner hells while trying to face their feelings. Meanwhile, the external characters move around the pair like chess pieces, causing and effecting both Angel and Jasmine to overcome their issues all the while they are dealing with their own drama.

This book very easily could have been crushed by it’s own intensity. There is a great deal of emotional trauma and mental impairment happening that the reader is aware of at all times. I think the one thing that Nicole Banks does that actually adds a certain levity to this is the ‘speak’ of the characters. Not just the words that they use, which is incredibly natural, but also their inner dialogue.

What the hell? What were they talking about? They couldn’t be talking about Jasmine. My brother grunted but didn’t say anything. Chase laughed, “Bro is that really your response? A fucking grunt? I mention Jasmine and your inner caveman comes out?”
“Stop being a schmuck, Chase. You know why I’m back.”

If there are any detractors of this book it is the poor editing. For as good as the story is, I know that it will be a deal breaker for many readers once they see the spelling, grammar and punctuation errors that this book has.  I think it is very easy to read a book and stamp your judgement on it based on whatever scale you believe exists for publishing a novel. In truth the reader actually has the easiest job when it comes to a book. All a reader has to do is pick it up and read it. Writing a novel is a lot of work and publishing that work is often something you do for yourself, never thinking so far ahead of yourself as to the larger issue of the micro-details. For the author having the book baby is the event. The color of the baby’s eyes and hair and it’s name and where it goes to school, who it’s friends are… all secondary. You learn to think about those details with your second book baby. So while this book is very weak on the editing ground, I am taking into consideration that this is the first novel of a self published author who will more than likely apply what she has learned through writing and publishing this book with her next. As for readers and reviewers…Haters gonna hate.

I really enjoyed the book and I will be checking out book two of this series which will be titled, Into Pieces. For Nicole’s Word Slinger page, I sent her a set of questions for an interview which I haven’t read yet because I didn’t want them to color my review. Please check out her Weekly Indie Word Slinger page and give her the love. =)

Nicole’s website currently has the first 2 chapters of Into Pieces (Shattered Hearts book 2) available. Also it has tidbits of Fighting Fate, a new novella which will hopefully be out in February.