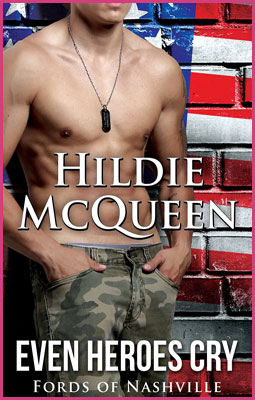 “McQueen is an intense and emotional storyteller that will keep your turning the pages all night long.” (NYT and USA Today Bestselling author Liliana Hart)

Military vet Adam Ford returns to his hometown a damaged hero—the war stole his best friend and left him with severe PTSD. Every day is a challenge as he struggles to reconstruct his life. When a tempting beauty moves in next door, Adam’s world is turned upside down and he doesn’t appreciate it.

After losing the love of her life in Iraq, Tesha Washington runs away from everything she’s ever known and escapes to a small town where she takes on the challenges of restoring an old Victorian house. Out of options, she turns to her reclusive neighbor for help.

As Tesha slowly draws Adam out of the shell that used to be a man, she also learns there really is such a thing as starting over. Together they discover the healing power of love and a bond to last a lifetime.

Just as she pressed her finger onto the doorbell one last time, the door opened and Tesha lost her breath. Her sharp inhale the only sound for a few seconds.

In the doorway stood the most stunning man she’d ever laid eyes on.  Never again would she roll her eyes at the mention of the word “breathtaking.”  His penetrating blue gaze took her in. Didn’t just look at her eyes, but dove into them.

He stood about six foot three, but it was not his height alone that made him impressive. It was the massive expanse of his shoulders, the broad muscular chest, thick-corded neck and square jawline. It took a moment to realize they both stood staring at one another without speaking.

He didn’t seem discomfited at her silence, but stood like a statue. If not for the barely noticeable lifting and lowering of his chest she’d think him not real.  Long lashed grey blue eyes met hers. They darkened to a deeper blue and his nostrils flared just enough to let her know he was attracted. Tesha flushed under the intense scrutiny, and the raw attraction she felt instantly. The haze in her mind somewhat lifted and she held her right hand out to him.  “Hello. I’m Tesha Washington. Your new neighbor.”

The eyes moved slowly from her face down to her chest and finally to her outstretched hand. His much larger hand swallowed hers.

“Adam Ford.” At the touch, her lips parted, but she recovered enough not to gasp again like a Jane Austen character, and shake his hand. When he did not release it, she pulled free of his loose grip.

Once again she remained standing, her brain failing to engage and remember what she’d come over for.  Maybe later it would seem odd that she’d not felt any compulsion to escape, to put distance between them like she’d done with every man who looked at her with even remote interest.  Since David’s death, any man’s attention caused her guilt or awkward discomfort. The reason things didn’t work out with Cleve. But not this man.

A wonderful aroma of oregano, tomato, and garlic tickled her nose and Tesha sniffed the air. “Something smells amazing.”

Adam looked over his shoulder into the house. It was then she noticed a kitchen towel draped across it.  “I’m cooking.” His eyes slanted to the floor and then up to her. Surely it was not meant as flirtation, but the sweep of his lashes made her stomach flip. He cooked?  His throat moved when he swallowed and cleared it. Each one of the handsome man’s movements sensual, without meaning to be. Tesha could barely drag her eyes from his throat to meet his gaze.  “I’m sorry I didn’t mean to interrupt whatever you’re doing.  I can come back another time.”

Once again he remained silent, his face stoic except for what she translated as interest when his gaze roamed from her eyes to her lips.  He took an awkward step back. “Please, come in.”

When he turned to walk, her eyes popped wide at his perfectly formed behind.  Now that was what she called booty. Her mouth practically watered wondering what it would feel

like to have that under her palms. He wore loose sweatpants that hung low on his narrow hips, the worn fabric leaving very little to the imagination. When her mind went there, Tesha secretly thanked God he could not see her reaction to his tush. Ashamed at her thoughts, she rubbed a hand over her cheeks and dragged her eyes away to take in the interior of the house.

Most days she can be found in her pajamas hiding from deliverymen while drinking tea from her David Gandy coffee mug. In the afternoons she browses the Internet for semi-nude men to post on Facebook.