Today in the Frequent Flyers Book Blitz, we get a preview of Unscheduled Departure, by T.M. Franklin. 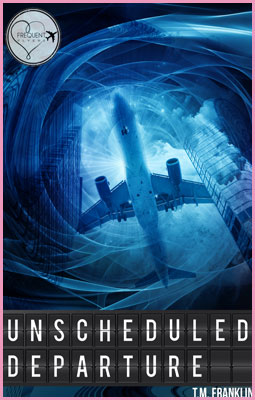 Rowan Elliott is devastated when her boyfriend, Finn, tells her he’s moving across the country to take over the family business, and thrilled when he changes his mind at the last minute and gets off the plane.

But then things get . . . weird. Finn’s acting strange, and Ro’s getting mysterious phone calls that have her questioning if her boyfriend’s really who she thinks he is.  As Ro races to figure out what’s going on, she discovers it’s more complicated than she could have ever imagined.

And if she’s not careful, she could lose her Finn forever.

“Ro, I have no idea what you’re talking about,” he said, pulling to an abrupt stop in the parking lot of my apartment building. “I never left a voicemail. Not today.”

I fumbled in my bag for my phone. I was not imagining this. “You did. You called—” I thumbed through my calls and held it up victoriously so he could see. “—at 12:06 p.m. today. See?”

His eyes narrowed at the screen. “That says Private Number.”

“Why do you think that was me?”

I rolled my eyes. “Because you left a voicemail!” My voice grew louder, a little screechy, but I couldn’t help it.

“Babe, I never left you a voicemail today!” Finn said, aggravation growing in his own tone. He pulled out his own phone and stabbed at it a few times. Finn’s familiar ringtone sounded on my phone, his picture popping up on the screen, along with his name.

“See?” he said. “At 12:06 I was driving. I didn’t call you. Whoever that Private Number was, it wasn’t me.” He tapped his phone and the ringtone stopped.

I stared at my phone and rubbed my forehead. My stomach roiled and an ache throbbed behind my eyes. “I don’t understand. I heard—”

“Let me listen to the voicemail.”

“It…got deleted.” I met Finn’s unreadable gaze and knew how it sounded. Weird. Crazy.  But I had heard him. It was Finn.

“I don’t know what’s happening,” I murmured, my hands trembling as I brushed the hair away from my face. “I know what I heard.”

“Ro,” Finn reached across the car to grab my hand, wrapping it up in both of his. “It’s okay.”

I shook my head. Suddenly, I wanted to be alone. To go to sleep. To not think about all of this for a while. “I’ll be fine. I’ll call you later?”

“Okay.” He leaned across the seat to kiss me. “Sleep well.”

I nodded and got out of the car, waving at Finn and only letting my smile fall once he drove away.

I wasn’t convinced. I knew what I had heard, and no matter what Finn said, it was him on that voice mail. I wondered if maybe the message was old— one I’d missed. I couldn’t imagine how that might have happened, but I wasn’t ruling it out just yet.

Because the alternative was one I wasn’t quite ready to explore: If it was a new voice mail, and it was Finn who’d left it, that meant he was lying to me.

And I had no idea why.

T.M. Franklin started out her career writing non-fiction in a television newsroom.
Graduating with a B.A. in Communications specializing in broadcast journalism and production, she worked for nine years as a major market television news producer, and garnered two regional Emmy Awards, before she resigned to be a full-time mom and part-time freelance writer. Her first published novel, the Amazon bestseller, MORE, was born during National Novel Writing month, a challenge to write a novel in thirty days. MORE was well-received, being selected as a finalist in the 2013 Kindle Book Review Best Indie Book Awards, as well as winning the Suspense/Thriller division of the Blogger Book Fair Reader’s Choice Awards.

In addition to MORE and its sequels, The Guardians and TWELVE, Franklin penned the Amazon best-selling short stories A Piece of Cake and Window, which also won a Blogger Book Fair Reader’s Choice Award for Short Story/Fantasy. Her new YA romance, How to Get Ainsley Bishop to Fall in Love with You, is Franklin’s first love story without a paranormal or fantasy element, although she believes love is the best kind of magic.

Romance flies the friendly skies in this diverse collection of short stories from a talented group of best-selling and up-and-coming authors.

There’s something for everyone in this mile-high compilation – from a love story born in a blizzard to a steamy encounter spawned by a series of crazy events. For supernatural fiction fans, how about the tale of an airport that’s also a portal to another world… or a scheduled flight that takes a detour into an alternate reality?

From an unexpected trip that reignites a twenty year old flame, to a quirky liaison between a ticketing agent and an adorable doctor, Frequent Flyers takes you on a journey that will touch your heart and leave you flying high!

Frequent Flyers on All The Things Inbetween:

Book It – In News Today: Book Blitz for Frequent Flyers Featuring “Fly Me To The Moon” by Bev Elle